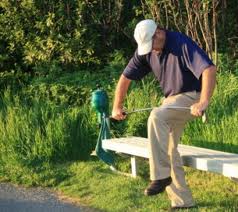 The great thing about the game of golf is that you inevitably learn something new every time you play.  I had a big fight with my golf swing today and will share what happened in hopes that you can learn from my experience.

Today I played my worst ball striking round of the year, but also shot my lowest score of the season (73).  What happened?  Off the tee, I couldn’t hit water from a boat and was looking at big pushes with my driver and irons the entire day.  After trying every WOOD bandaid I knew of I finally figured it out on the 17th tee.  I had reverted to my classic miss when I come up and out of my spine angle.  On the next two tee shots, I exaggerated the spine angle retention and everything re-clicked into place.  There are two important lessons here:  1)  If you’ve identified a swing fault through professional instruction and start missing shots and seeing a consistent recognizable shot pattern, you are likely falling into the same old habit, even though you may not feel as if you’re making the old move.  2)  You get out of this game what you put into it, and you need to focus on practicing what you’ll need the most during play.

The first point validates that we are human and humans are creatures of habit.  Good and bad, those habits are hard to break and should be recognized for what they are.  Focus on identifying and correcting the bad and don’t get sidetracked on a bunch of other stuff.  To the second point, I had reviewed a period of time in the past where I enjoyed a nice stretch of play and had correlated that with a certain type of practice which I had recently gotten away from.  In short, I got lazy.  Yesterday I decided to buckle down and duplicate that old practice session and it paid off handsomely.  The drill was hitting 100 uphill putts from four feet using my alignment sticks to frame the putt.  I made 19 of the first 20 but noticed I was cutting the putts and they were leaking in the right side of the hole.  I patiently worked each group of 10 by checking one fundamental per set until I hit the right one and proceeded to bang in 50 in a row with confidence.  The fundamental was to feel the club brushing  the ground on my backswing which helped keep the putter head low and promote solid contact.  Now this drill is quite boring and takes a considerable amount of time, but the payoff was worth it.  Today I had my best day putting, especially from long distance, which was crucial since I wasn’t hitting my irons close.  The confidence boost the practice provided was invaluable, as I felt totally ready and prepared for success over every putt.

On the swing fight, give yourself a chance by managing your game and having the courage to admit your swing is off and make good playing decisions.  Once I recognized I was off, I kept the driver in the bag and worked the 3WD for position.  I found that even when you lose distance, it’s important from a mental perspective to get your tee shot in play because you can become despondent  and disinterested when you drive the ball into trouble too often.  So when your swing deserts you, continue to make an aggressive swing with a more conservative club.  Use whatever you need to get the ball in play and keep your mind in the game.

What I admire most about Jack Nicklaus and Tiger Woods is not all the major championship victories, but the ability both had to play great golf and keep their head in the game when they didn’t have their best move.  It’s frustrating to not hit driver on the par-5s or on the long par-4s, but trust me on this; it’s more important to stay in play and give yourself a chance.  Often, as you lower the pressure on yourself to drive it straight, you’ll regain confidence that will help your swing to come around.  Good luck!