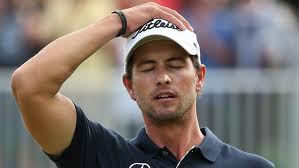 should have to go through but everyone who plays golf has probably experienced to some point.  My Adam Scott moment occurred last Monday at Eagles Landing in Ocean City, MD.  This was not a tournament round where competitive pressures can get the best of you, but a recreational round where a personal scoring record was at stake.  Having been in both situations, I recognized the similarities afterwards.

Heading out to the course, I had no expectations for good form since I had not played or practiced for two weeks.  Just showed up and teed off after pitching and putting for about 10 minutes.  The round started off innocent enough with a routine par on #1 and a misplayed chip on #2 that led to a double bogey.  I steadied myself with a couple of pars and then reeled off four birdies in five holes to close the front nine in two-under 34.  Five more pars and a birdie later, I was at three-under with three to play and knew my personal best score of 2-under was at risk of falling.  Normally, I never total my score after nine holes because I try to stay in the moment and not think about score, and I didn’t this time, but trust me, when you are three-under, you know it.

I had actually started to come unglued on the 15th hole and pushed a three-iron layup off the tee into a pond for a lost ball, but managed to save par by draining a big right to left breaking 40-foot putt.  Convinced the golfing gods were on my side, I stepped up to the 16th tee, which is a very simple 300 yard par-4 and cold topped a 3-wood into a swamp 50 feet in front of the tee.  My brain was running 1,000 mph now and I re-teed, determined not to think about any mechanical thoughts, and I nailed my 3-wood in the middle of the fairway.  Unfortunately I was left with one of those in between distances of 66 yards and hit my 56 degree about 50 yards.  Three putts later I had a triple and was back to even-par and in a mild state of shock.

Even-par through 16 is great at this course, but I felt like I was 10-over.  The 17th is a medium length par-3 and I managed to place my 6-iron about 15 feet under the hole.  Still reeling from the three-putt on the prior hole, I got tight and left the first putt about 4 feet short and missed the par attempt.  #18 is a par-4 that was playing very short and required only a precision layup with a medium to long iron and then a medium iron to the green with a forced carry over a marsh.  My tee shot barely hit the clubface and I left myself an impossible shot from deep rough that needed to fly under a tree and over the marsh.  Made it under the tree and no farther – double bogey.  So I played the first 15 holes in three-under and the last three in six-over.

The propensity to choke can happen at any time to anyone and to a player of any caliber.  What could I have done differently?  I thought I was staying in the moment, at least trying to, but it didn’t work.  What could Adam Scott have done differently at Lytham?  Seems like the urge to protect, get cautious, and think mechanically all work against you, but there has to be a way to stop the bleeding especially when you’re hot and playing well.

What’s your Adam Scott moment?  Got any cures?

Picking a winner for the 2012 PGA Championship 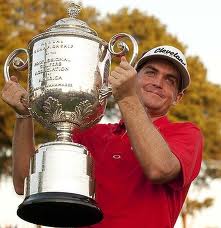 is a tall task, with several factors from wind, weather, past performance, and difficulty of the Ocean Course at Kiawah Island, creating a delectable stew of confusion, so let’s spoon it out and sift through.  The string of consecutive non-repeat major champions has hit 15 and will continue this week.  The principals:

Defending Open Champion Ernie Els was in poor form at RBC last week and missed the cut by three strokes.  No doubt some mental fatigue set in after the emotionally draining come-from-behind win at Lytham.  Hats off to him for living up to a play commitment if that’s why he was in the field.  His record in past PGAs is a mixed bag and I don’t like him this week.

Tiger Woods is struggling with a balky putter again and inconsistency with the flat stick is now the norm.  The three-time winner on tour this year has been in contention at all three majors but couldn’t close the deal.  Whether ahead, tied, or coming from behind, Tiger’s innate ability to dominate a golf tournament is still there but doesn’t reveal itself as often as it did in the past.  He may win a major again but not this week.

Defending champion Keegan Bradley is paired with Tiger for the first two rounds and after three rounds at Bridgestone is second in the field in GIR and third in putting.  Despite a ho-hum year, he’s got momentum, wants it bad, and will contend.

Jason Duffner’s last three tournaments in the U.S. include a first, second, and fourth.  He’s in excellent position after three rounds at Firestone and is a serious contender.  After last year’s playoff loss to Bradley at the Atlanta Athletic Club, a win at Kiawah would be sweet.

Rory McIlory seems to be in good form and is playing in the U.S. one week before a U.S. based-major.  Pattern seem similar?  Fooled me once already this year with the same ploy at St.Jude – U.S. Open, and I won’t be fooled again.  Rory’s out.

LukeDonaldLeeWestwood is the new two-headed monster for major underachievement.  I’d give Westwood the edge here because of the requirement for solid ball striking at one of the toughest courses in the world, but neither will win and frankly the repeated storyline of both in the majors is growing old.  Not this year for LDLW.

Trendy pick is Davis Love III.  He’s from the area, loves playing on Bermuda greens, and inevitably contends in a lot of tournaments close to home.  At 45th in the 2012 Ryder Cup standings, his chances of playing his way onto his own team have dwindled, but he’d be a great sentimental champion in this locale.

Winner of the Wanamaker Trophy and coupe de grace to an outstanding year:  Jason Duffner.

Runner up:  Keegan Bradley as the tournament has an eerie resemblance to last year with a close call but different result.

Third:  Davis Love makes a huge bid that just falters with the younger guys fighting it out on Sunday.

My golf season has come to a screeching halt with the onset of our summer kitchen/living room remodeling project and I’ve been forced to take the month of August, and maybe longer, off.  Other than eating tons of restaurant food, breathing in plenty of dust, getting little rest, no play, and very little practice or exercise, I have not much to look forward to.

So this is a great opportunity to step back and evaluate the goals and KPIs for my 2012 Golf Improvement Plan,  and see if I’m on target.  The primary objective was better ball striking achieved through a new conditioning program.  The numbers through 26 rounds this year and 35 in 2011:

Analysis:  The big winner has been my physical conditioning and that I feel great.  Walking 18 holes in the most adverse conditions has not been a problem.  Playing 198 holes in six days at Myrtle Beach was not a problem.  I attribute this to the exercises for back, shoulders, and legs.  I’ve also enjoyed a significant increase in distance with the driver.  One drill I do with every workout is to swing a club upside down and fast.  I think this has made a huge difference in my balance and timing, which corresponds to better swing speed.

I’m clearly not going to hit my goal of 11 GIR per round and one thing has remained quite apparent is that old habits are hard to break.  I still come up and out of my spine angle and that remains a major obstacle to consistent contact.  Several rounds I’ve felt very close to having a great ball striking day only to be undone by one or two bad swings with my standard miss (big push).  The modest increase in .61 GIR per round makes me wonder if all the effort was worth it but the 1.64 stroke average improvement for someone at my handicap level (5) tells me it was.

So we hang ‘em up until the fall and make a final push for improvement.  How’s your game coming?