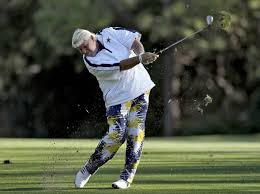 I was going to write a post on the entertainment value  John Daly provides to golf, and about how ridiculous the 90 he shot in the second round of the Valspar Championship was, and how that included an octuple-bogey 12 on the 16th hole, and how that was the 16th time that he’s carded at least a 10 on a hole in his PGA Tour career. . . that was until I carded a 92 today in my season opener.  I did not get the number of the truck that just ran over me but I am still reeling.

We played in brilliant sunshine with heavy wind, and my game was just horrible.  The score was my worst since a 98 on November 23, 2011 and my first time above 88 in two years.  So who’s worse off, Big John or me?  I don’t have the fame, fortune, two majors, and all the notoriety that he does, but he’s clearly worse off.  Golf his his day job and just a hobby here.

Can you find a nugget or two in bad rounds?  Absolutely.  The company of my friends was great and just getting out of the house was wonderful.  With the golf, I only took 28 putts. . . even if it was an artifact of only hitting two greens.  And I managed to shape/place about five or six tee shots using the ball flights I’ve been practicing from the Nine-Shot drill, but that was it.  The irons and wedge game were putrid and I made several rookie mistakes like trying to curve balls playing directly into a strong headwind.

I kind of saw this coming because we moved opening day up from tomorrow when D.C. is supposed to get another round of snow and ice.  Saturday is usually practice day with Sunday being game day and I felt completely unprepared out there.  In fact, past rounds moved to Saturday without the benefit of a prior day’s practice have yielded similar results.  At least J.D. gets to practice before game day.

I’m not too worried about the bad start because it was the first round after a four month layoff imposed by a particularly brutal winter, and it was played in very difficult conditions.  The good news is that there’s nowhere to go but up and we’ll be back at it next weekend!

BTW:  I’m keeping 2014 season stats off a new page on the blog’s main menu.  Check back anytime to see my latest metrics.

So I’ll probably head out in the cold tomorrow before the snow starts to try and correct some of the short game problems experienced today.  They will be hard to live with all week if I don’t fix them.  Finally, I can take some encouragement from past history because back in 2011, I followed up that 98 with a 70 in the very next round.  Weird, but here’s hoping history repeats itself.  How was your opening day?

11 thoughts on “What Good Can Come From A Bad Round?”