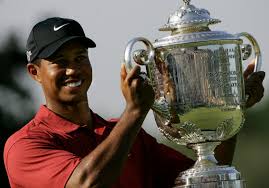 Quick question:  What’s the measure of greatness in professional golf?  Short answer:  The number of major victories one has accumulated.  We don’t consider money rankings, driving distance, Vardon Trophy (scoring average), or even FedEx Cup championships.  The sole measure of historical excellence is how many Masters, U.S. Open, British Open, and PGA Championship victories one has.  This is not dissimilar to the NFL where Super Bowl titles are the standard, or Major League Baseball where World Series victories are king.  Tennis, the other major individual sport, measures its greats by number of Grand Slam titles won.

So why is the PGA Tour compromising the integrity of the major championships with it’s insane scheduling in 2016?  Take a look at the backside of the 2016 PGA Tour schedule and you’ll notice for the first time The Open Championship and PGA Championship are being contested only 11 days apart!  This is simply not enough time for the world’s best to recover physically and mentally, make the journey back across the Atlantic, and for excitement to rebuild in the fan base for the final major.  In a normal year, each event is generally spaced one month apart, with the exception being the two months between golf’s Masters and U.S. Open.

At first glance I attributed this to the presence of the 2016 Olympic golf event which is scheduled for August 11-14 and happens to fall right smack on the PGA Championship’s traditional window (one month from The Open).  But Olympic Golf is not the growth panacea everyone thought it was and The PGA Tour knows it.  At best it’s an inconsequential event with an unfair qualification process (only four players per country are allowed to participate eliminating many of the world’s best).  At worst, it’s a classic example of exceeding the economic law of diminishing returns with too much golf on TV.  I think after a couple tries, it probably will join baseball on the list of dropped Olympic sports.  Think otherwise?  Think Olympic golf will command the TV stage?  Think again.  The suits at PGA headquarters have scheduled the John Deere Classic to be contested simultaneously with the Olympic tournament.  And the USGA put the U.S. Senior Open in the same time slot as well.  When baseball was last played in the Olympics in 2008, Major League Baseball played right through the window and didn’t even give the Olympic tournament a sniff of concern.  I’m hoping golf plays out in a similar fashion.

Olympic golf feels like an attempt to force growth in an incorrect way.  The recent golf market contraction is due to the receding Tiger Woods wave.  As Tiger plays less, fewer folks tune in.  It’s a natural phenomenon that can’t be fought.  But cheapening the integrity around the existing major championships is absolutely the wrong approach and needs to be fixed.  The tour has the ability to shift schedules around and should flip-flop The PGA Championship with The Wyndham Championship, and move the former into the August 18-21 window.

On a global scale, the good news is that golf has a chance of re-entering a golden age with a core of young superstars take the sport by storm.  To allow natural rivalries to form between Jordan, Rory, Jason, and Rikie, the PGA needs to ensure the integrity of its competitions is on the highest level.  It should start with an adjustment to the 2016 schedule.

What do you think they should do?