Our golf travel group visited The Grand Strand for a long anticipated week of overindulgence from May 29 to June 5th and I finally learned the lesson that sometimes less is more.  It has its practical applications in life and sometimes needs to be learned and re-learned on the golf course.

Our trip was a wild ride from the start as we traveled to South Carolina during the height of Tropical Storm Bonnie.  The slow moving system lingered in the area until Wednesday and while no day was a total washout, we got wet during a couple of rounds.

Despite the rain, I still played 10 times over six days and loved every minute of it even though I ran myself ragged by the end.  For the week, I played:

Preparation:  I had been working on my short game in an effort to get rid of a 5-year case of the chip yips and boy did the work pay off.  My technique and mental game changes left me in a confident state and in complete control around the greens (post coming shortly on what has been working).  I was able to save countless strokes in a week where I hit a lot of loose shots with my irons.  Oddly enough, I drove it solid and straight but made some bad swings from a lot of ‘A’ positions.  On these difficult venues you are going to make bogeys, but in years past poor ball striking and poor short game would have resulted in several rounds ruined early with the dreaded “other” rearing its ugly head, but I knew early I was in business after making only one double bogey in my first 54 holes.  For the trip I had only three “others” in 180 holes played which thrilled me to no end.

I never went really low (76 at Parkland was my best round), but until the last day, played extremely steady and kept it in the high 70s and low 80s.  Unfortunately, the lesson of less is more had to be learned at True Blue (one of my top 5 favorite courses in the area).  I was starting to feel fatigued the previous day at Thistle (review coming) and by Saturday morning, was very sore and tired.  We warmed up at True Blue and I struggled to make any type of athletic move, even with a short iron.  I hit about 30 balls in an effort to get loose and never made solid contact.  Sensing it would be a rough day, I went through the motions, enjoyed the company of my playing partners, and bunted it around for an 89.

It had been a long week of playing a lot of golf in the sun, heat, and rain, and everyone was pretty whipped after our round at True Blue.  We had the common sense to forgo one final replay and headed off to the Dead Dog Saloon at the MarshWalk in Murrells Inlet for some refreshment.

Every year, we make the 7.5 hour drive to Myrtle Beach from Maryland but this year we decided to fly.  What a great decision.  The one hour hop from Baltimore on Spirit Airlines was effortless and left us in a refreshed state of mind and body.  The drive down is not bad but returning in all that traffic after a fatiguing week of golf is tough and I think we’ve probably made our last drive down.  In coming years, I’ll need to think about conserving my energy for the end of the trip.  Yes, 10-12 rounds of golf over six days may be too much and was a painful lesson.  😦

So that’s it for Myrtle Beach 2016.  Stay tuned for course reviews from Thistle Golf Club and Barefoot – Norman.  Play well! 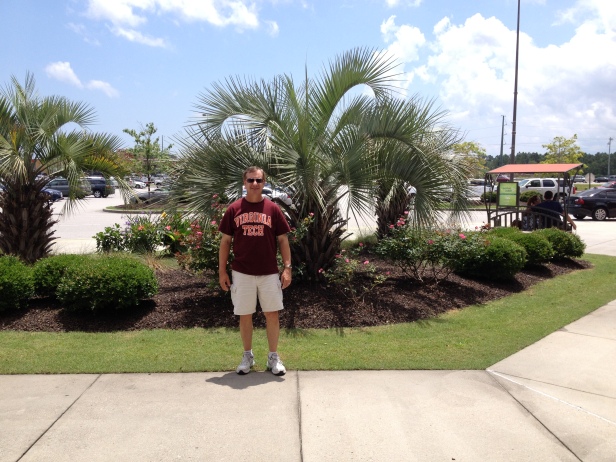