It was Saturday, June 5th and I was at True Blue in Myrtle Beach, and I could not make solid contact on the driving range while warming up for my round.  I thought I was simply gassed from playing so much golf on the trip but that was not the case.  Two weeks later on June 19, I had an awful time trying to hold my swing together during a round at Poolesville.  My poor strikes were starting to put pressure on the other parts of my game and my attitude soured.  Was I was facing mid-season burnout?  The next weekend, I practiced down in Delaware and took swing video during a rough ball striking session.  I spotted several things I didn’t like and tried to implement fixes but nothing worked.  Last Wednesday was the final straw.  I went to my school field with a bag shag and a sand wedge and discovered I could not advance the ball 70 yards.  I left despondent.  The next morning I called for a lesson with Justin Keith, the PGA pro at Falls Road Golf Course in Potomac, MD.

I arrived at the course and warmed up for 10 minutes.  On the five minute ride to the lesson tee, Justin took my history and golf vital signs.  I didn’t reveal I was a mental basket case, just that for the last seven years, I’d averaged 8 GIR per round and wanted to improve the consistency of my ball striking.  He asked if I had taken any recent lessons or been working on anything in particular.  I told him my last lesson was a few years ago where it was pointed out that I lose my spine angle on the downswing, and that the fault would be a very hard to correct.  Essentially, it was the source of my inconsistency.  He understood and we went to work.

He had me hit half a dozen 7-irons and videoed my last swing on his tablet.  We sat down in the cart and reviewed my swing.  I had two problems.  One was a cupped left wrist at the top of my back swing which was getting me off plane.  The second, which was likely a result of the first, was a downswing initiated with my hands instead of my body.  This was the reason I was pull hooking long irons, hitting wedges fat, and push cutting everything else.   He pointed out that in my follow through, I had a big chicken wing with my left elbow, and that was an indicator that I hadn’t rotated through the ball but had released early.  He also thought that I’ve been able to maintain a 5-handicap with this move because I could time my down swing well enough to square the club face at the impact.  But when my timing was off, I had no chance.

Then we worked for a half hour just hitting nine-o-clock to three-o-clock punch shots with my 7 and 5-irons.  On my back swing, he had me flatten out the back of my left wrist using Dustin Johnson as a mental image.  DJ bows his wrist more than anyone, but this thought worked great.  On the down swing I worked to initiate the move with a bump of my left hip.  On the follow through, he told me to cut it off halfway, with both my arms fully extended and elbows close together (to get rid of that chicken wing).  This was hard and felt very weird at first, but after a few swings I noticed that when I executed I had easily maintained my spine angle without even trying.  The thought of the spine angle fix as an artifact of the other changes filled me with tremendous hope and enthusiasm.

At the conclusion, Justin videoed my last swing and we went back to the cart to view.  He showed me the correction I had implemented along with a down the line shot of Hunter Mahan in his follow through, and how I had gotten much closer to the ideal position.  I thanked Justin and with my head full of positions and excitement, went home for lunch.

Here’s a picture of my follow through with a 6-iron.  Notice the chicken wing left elbow: 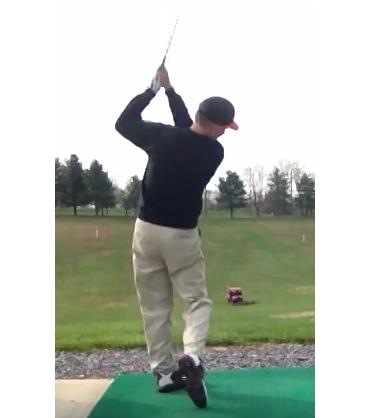 Now here’s a picture of Hunter Mahan down the line with a 5-iron.  Notice how he’s fully extended his arms and how his elbows are close together and how he’s retained his spine angle.  This is the image I’m working to get to: 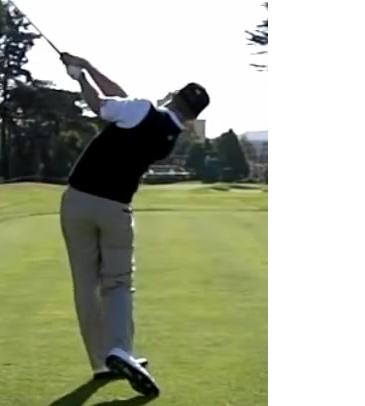 After lunch I went out to my course for a large bucket of 7-iron punch shots, just trying to get the feeling of the new positions and to initiate the downswing with my body.  The contact was excellent and the ball flight lower than normal but very straight and controlled.  I finished with a few sand wedges and discovered I had regained 15 yards of distance that had mysteriously disappeared a few years ago.  The only issue was that all this work had been done off a mat.

The next day, I headed out to Blue Mash for an extended practice session off the turf.  My first indicator of progress was that my divots were flying straight with the gap wedge and 7-iron.  Previously even well struck shots had my divots flying left with that early release.  Again, contact was good, and I mixed in some 4-irons.  Later I added some 3WDs and a few drivers.  Towards the end of the session I started to hit some loose shots with the 3WD and driver, but figured I may have been getting tired since I had hit the equivalent of six buckets of balls in the last two days.  So I rested the next few days and went to work 🙂

Thursday after work I hit a bucket off the mat and received excellent feedback with the gap wedge and 7-iron and I began to experiment with different ball positions and hitting knock-down shots.  I was pleased that I could now control trajectory better by moving the ball back or forward and rely on maintaining  good contact.

A special shout out goes to The Grateful Golfer.  Jim had recommended that during my learning, I mix in 9-hole rounds of play without keeping score.  What an excellent idea!  I did that yesterday on my executive nine and was pleased with the results.  While shooting at actual targets, of my 11 full swings I only missed one.  It was the old swing, but the number of new good ones was very satisfactory.  I hit 7 greens and a fringe and the single I joined up with was impressed enough to ask for the name of my teaching pro.

The back swing position is starting to feel natural but the down swing and follow through need more reps.  I have also not hit a driver on the course yet.  I could probably play real golf with this move if I had to but will not rush it and will use the balance of July to keep working the move and getting comfortable with the driver.  Hopefully my play will take off in August.

A special thanks goes to Justin Keith.  In the past, I’ve taken a lot of golf lessons.  Some good, some mediocre, some poor.  This was the simplest most productive, and well timed instruction I’ve ever had.  If you are in the DMV and need help with your golf game, call Justin at 301-299-5156 or email him at jkeith@mcggolf.com Thanks Justin!