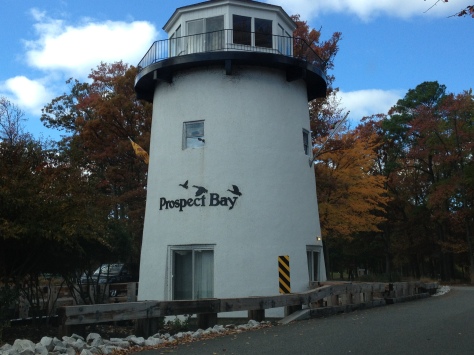 The first tournament of the year is in the books and it went very well, sort of.  We were playing a charity event for the United Way of Anne Arundel County, which is a very worthy cause.  The site:  Prospect Bay Country Club in Graysonville, MD.  The format:  Captain’s Choice scramble.  The goal at these events is to raise as much money for the charity as possible.  Normally, the team’s entry fee is the main contribution, but it’s not uncommon to use silent auctions, run other contests, and allow the players to purchase packages of little rules modifications that enhance the competition.  This was no different, and every one of the 80 players purchased a $30 package which included raffle tickets, two mulligans, two sandies, and one tee shot from the forward tees on a par-five.

The good news:  we made everything we looked at and shot 18-under to win, three strokes clear of the two second place teams.  The bad/weird part was how we used the sandies.  These little “enhancers” allow you to throw your ball out of a bunker, which we did three times and resulted in two birdies and an eagle.  Now, everybody was playing by the same rules, but it got weird for me throwing the ball.  I think the game ceases to be golf when you advance the ball with anything other than a club.  I’m not saying it wasn’t fun, but on one occasion, we had one ball on the green about 25 feet putting for birdie.  Another ball was in a greenside bunker which we knew we could throw closer and did.  On another occasion, we deliberately hit our last ball at a bunker to be able to use the throw.

These events are about making money and not necessarily winning.  Some folks construct their teams with ringers and play these things to win every time.  Our team is constructed with good players but built to participate.  Once in a while we win, but our goal is to have fun and fundraise.  This victory felt kind of empty and it’s been bugging me a bit for several days.  I’m not sure why.  Has this ever happened to you after winning with some funky rules?

Whoa, not so fast, Karen McKevitt.  She’s a politician in Northern Ireland, and coined the phrase to describe Rory McIlroy fresh off his U.S. Open triumph.  While McIlroy’s performance was stellar and dominating, a run of majors similar to to Tiger’s isn’t in the cards.  The competition is too tough and young guns like Jason Day, Dustin Johnson, and Luke Donald are too hungry.  Resurgent old timers like Lee Westwood and Sergio Garcia are showing good form and are also primed for runs now that Tiger is off the scene.  So congrats on a great tournament but don’t get a big head and get ready to feel the heat at Royal St. Georges!